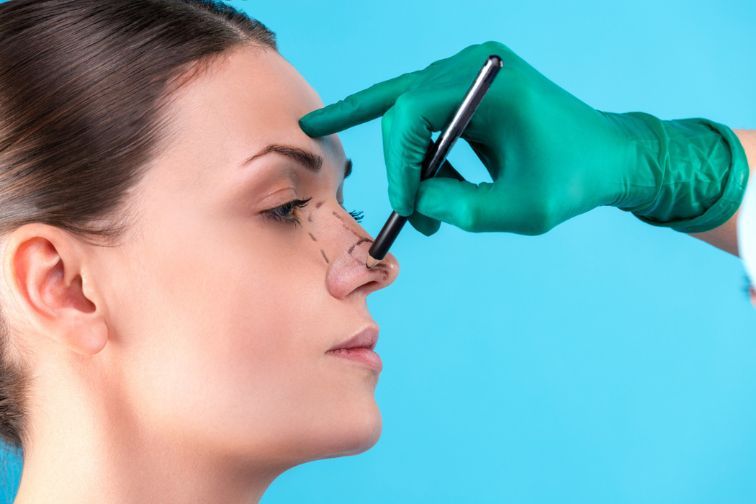 Rhinoplasty or “Nose Job” is one of the most popular procedures performed on both men and women. The nose occupies the center of the face and it is, without doubt, one of the first things people notice about the face. With that being the case, it should not surprise us that there were more than 300 000 rhinoplasty nose plastic procedures in the U.S. in 2020 (According to the American Society of Plastic Surgeons). Either for cosmetic purposes or because of a medical condition (for example – improving breathing function), rhinoplasty is a facial outpatient surgery routinely performed at our plastic surgery center.

What Rhinoplasty Can do For Our Patients?

The structure of the nose basically consists of a skin envelope surrounding various bones and cartilages. It is the bony and cartilaginous structures that are contoured by our plastic surgeon, Dr. George Lefkovits. The purpose of rhinoplasty surgery is to alter the size and shape of the nose to help achieve balance with the rest of the face and your desired appearance of the nose, so as to help you deal with breathing difficulties and certain medical conditions.

Most patients seek a reduction in the nasal profile, but in some cases, especially certain ethnic groups like Asians and African Americans, may need augmentation or enhancement of the profile. We tend to use human cartilage as the source of the implant rather than synthetics.

Who is a Candidate For Rhinoplasty?

The nose consists of bone, cartilage, and skin. Rhinoplasty manipulates the bone and cartilage but cannot change the texture of the skin. Therefore, most patients who have satisfactory skin coverage can undergo the procedure. The worse the skin condition the longer the healing and the less optimal result. Of course, patients must have the proper reason for doing the surgery.

Many people have problems and deformities of the nose as a result of age, injury, or genetics. This surgery can help them improve the quality of their life significantly.

What is The Best Age For The Rhinoplasty Procedure?

The most common age group undergoing rhinoplasty surgery are teenagers and young adults. It is not recommended to have the surgery before age 14. But patients in the middle age group as well as older patients also often undergo surgery operations with very good results.

What is Open Rhinoplasty?

Rhinoplasty is considered a difficult procedure because one is operating in a small, confined space. Open Rhinoplasty is the term used when rhinoplasty involves an incision on the outside of the nose in the base area. This incision is used to expose the inner nasal anatomy including nasal bones, cartilage, and septum. This exposure increases visibility but at the expense of a visible scar at the base of the nose. The increased dissection also usually leads to increased post-operative swelling.

What is Closed Rhinoplasty?

Closed Rhinoplasty is the term used when rhinoplasty is performed through the inside of the nose without an outside incision. This makes the procedure a bit more complex but with the advantage of leaving no surgical scar and usually resulting in less post-op swelling. Closed Rhinoplasty requires longer and more intense training.

What Are The Pre-Op Requirements?

Before the surgery, you will:

Take into consideration that you will also need Covid PCR testing 3 days before the surgery.

If you are feeling worried or uncertain about rhinoplasty, our surgeon Dr. Lefkovits at Park Plaza Plastic Surgery from New York City will give you detailed information about the nose surgery. While Rhinoplasty is a very common operation, like other procedures it carries risks.

Before rhinoplasty, the doctor will discuss with you all the risks, but as a patient, you should ask everything you feel unsure about. 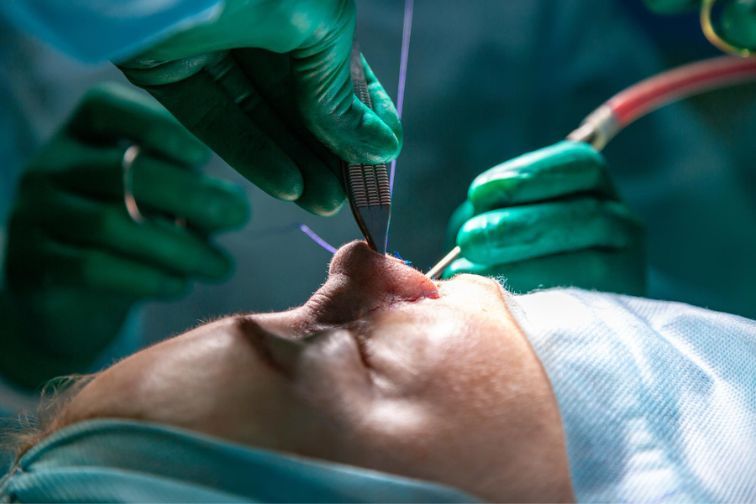 How long is the procedure?

Rhinoplasty is generally performed as an outpatient in an office or hospital setting. The procedure usually takes about 1 to 2 hours and you return home the same day.

What type of anesthesia is used for rhinoplasty?

The nose surgery is performed in our office operating suite under general anesthesia, after appropriate pre-operative blood testing and physical examination. This means that you will not be awake throughout the procedure (which is the case with local anesthesia). Occasionally, sedation will be used instead of general anesthesia.

Where are the incisions made?

The incisions generally lie inside the nose. In some cases, small incisions may be made on the outside, which is inconspicuous. Some nasal operations have a functional component, such as a deviated septum (the midline structure separating the two nasal chambers) or enlarged turbinates (structures lying along the side walls). These situations are often covered by insurance providers.

When a doctor performing rhinoplasty achieves desired look of the nose, the skin and tissue are redraped, and incisions are closed.

What Changes Can be Achieved With Rhinoplasty?

After detailed information about your desired look of the nose and the expectations you have of rhinoplasty, our doctor is able to:

Reduce the size of your nose

This is done by removing some of the cartilage (usually from the septum – section in the center of the nose) or bone.

Building up your nose by taking bone from the hips, elbow, or skull, and cartilage from the ears.

A change in the angle can be performed between the nose and the upper (top) lip.

Recovery After Nose Job Surgery – What Can You Expect?

After nose job surgery, you will often have packing inside the nose as well as taping and a splint. You will be taken to the Recovery Room where a nurse will be attending to you. You can usually leave after 1-2 hours with an escort. You will be asked to return in 1-2 days to have the packing removed and 4-5 days later to have the taping and splint removed.

Sometimes you may have additional taping applied for another few days. You will be asked to rest and to avoid exercise which requires a lot of energy (strenuous activity).

Most patients may return to school or non-strenuous work after 7- 10 days. You will continue to be followed at 6 weeks, 3 months, 6 months, and at 1 year. Of course, if there is a need to see you at other times, you will be asked to return sooner.

Bear in mind that it usually takes up to one year for your rhinoplasty to achieve the results and aesthetic you have desired. During that period of time, you may experience numbness and/or swelling around the tip of the nose. Any possible discomfort can be controlled by medications in the first weeks after the rhinoplasty procedure.

Rhinoplasty Before and After Photos

See results of the rhinoplasty nose reshape performed on our patients: 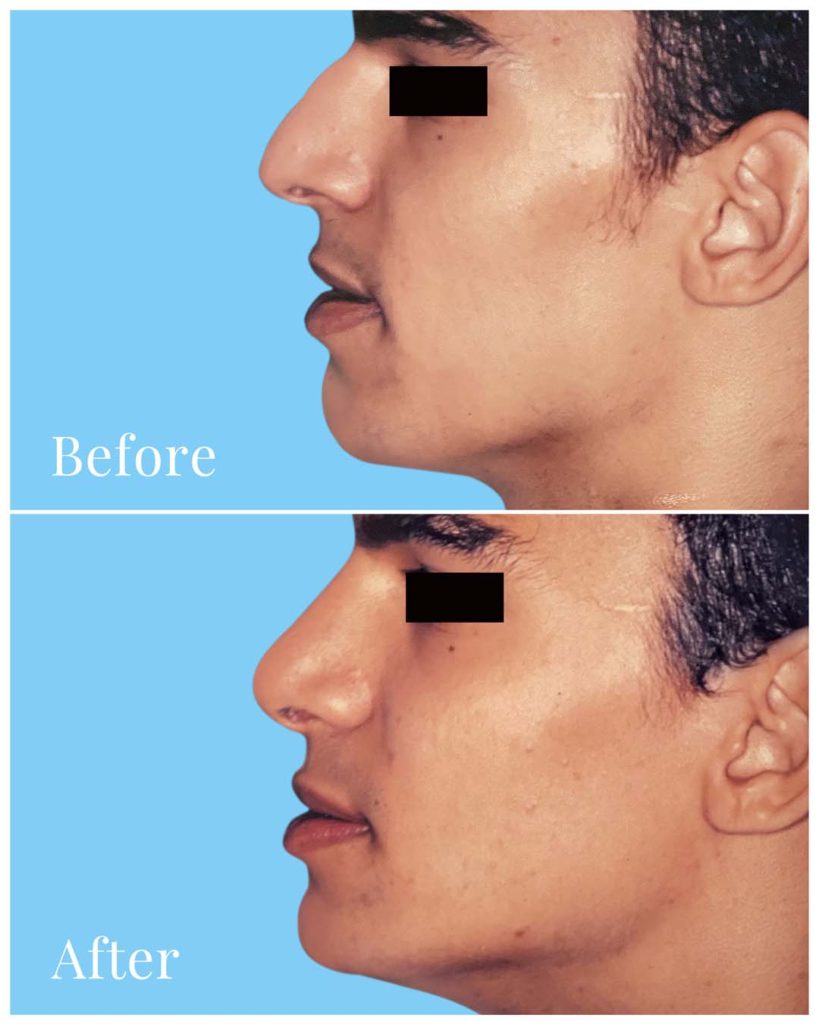 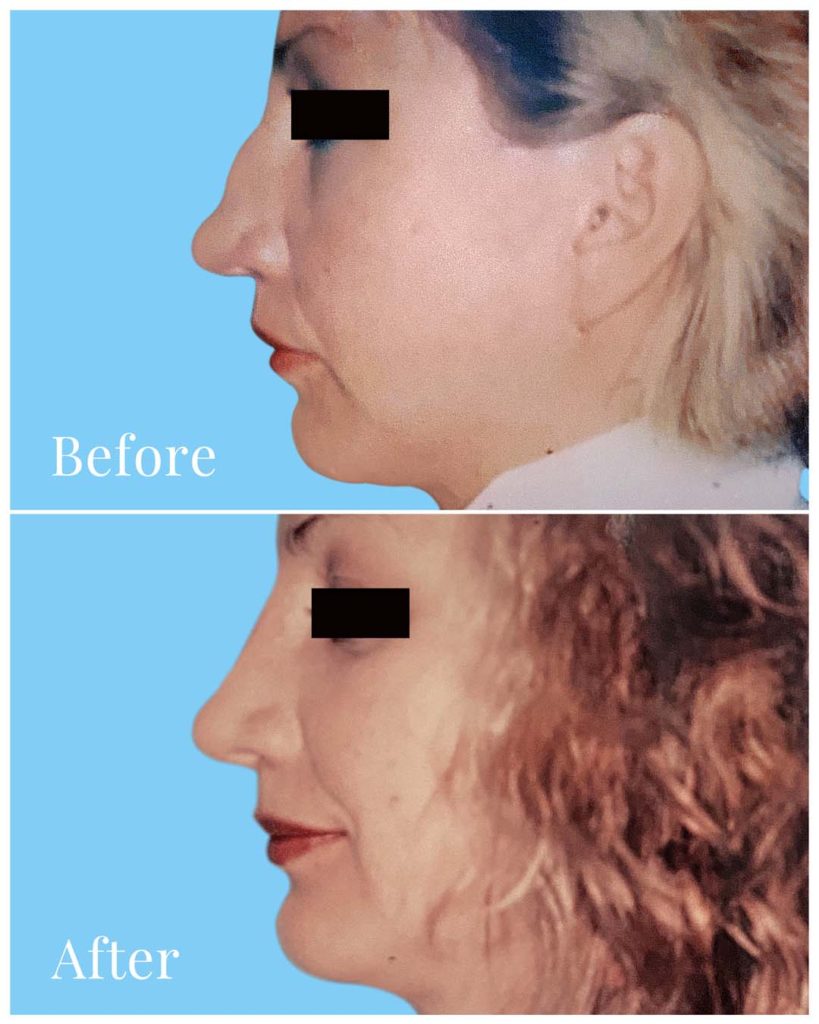 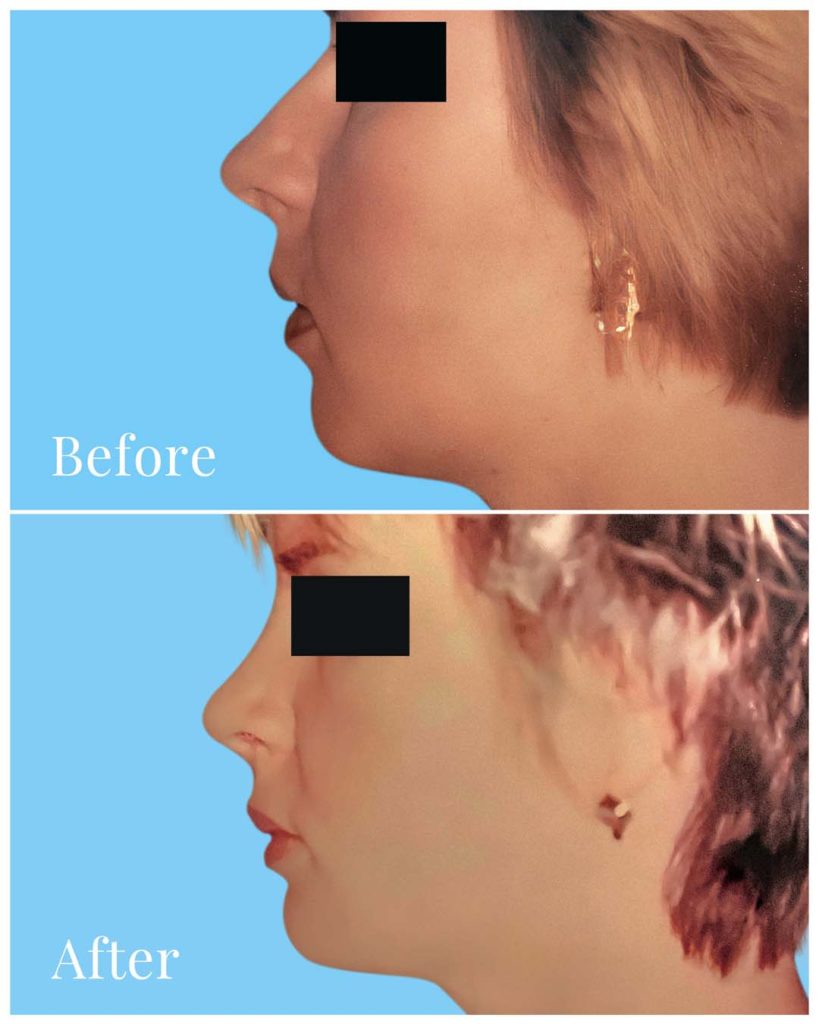 Why Choose Dr. George Lefkovits as Your Surgeon for Rhinoplasty? 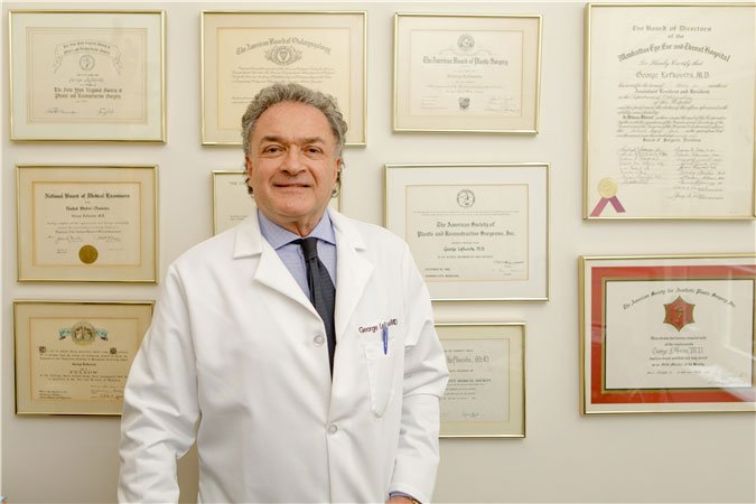 Dr. George Lefkovits is double board certified in ENT (otolaryngologist – specialized for head and neck surgery) and in plastic surgery. As a result, he has a very strong background in nasal surgery. And because of his prior Residency in Ear, Nose and Throat surgery he has extensive experience in Close Rhinoplasty.

He also stresses achieving a natural result (not an obvious “nose job look”). Over the many years, he has been in practice, Dr. Lefkovits has performed thousands of Rhinoplasties. He is also frequently consulted to perform revisional nasal surgery. With his medical expertise, he has been helping our patients for 40 years to get desirable nose and face profiles.

If you are not feeling satisfied with your facial features, especially regarding the shape or size of your nose and you live in New York, Dr. George Lefkovits, surgeon and owner of Park Plaza plastic surgery center from NYC, is one of the Board certified plastic surgeons who can provide you with a look you feel confident and beautiful in.

What Does a Rhinoplasty Consultation in New York Entail?

As even the smallest of changes or enhancements can produce significant changes, nose revisions are performed on a “case-by-case” basis. Our surgeon will meet you before performing this procedure to discuss your expectations and goals and carefully plan out your treatment to produce the desired results.

At the initial consultation, our doctor is going to:

How High Is Patient Satisfaction?

Patient satisfaction rate is very high. Because the nose occupies the center of the face, the focus on this feature is very strong. It is natural to have anxiety beforehand in not knowing exactly what the nose will look like and how it will blend with the face. That is why choosing the right surgeon is so important as it will allay a lot of fears and instill confidence in moving forward with the Rhinoplasty.

Video Testimonial of One of Our Patients: 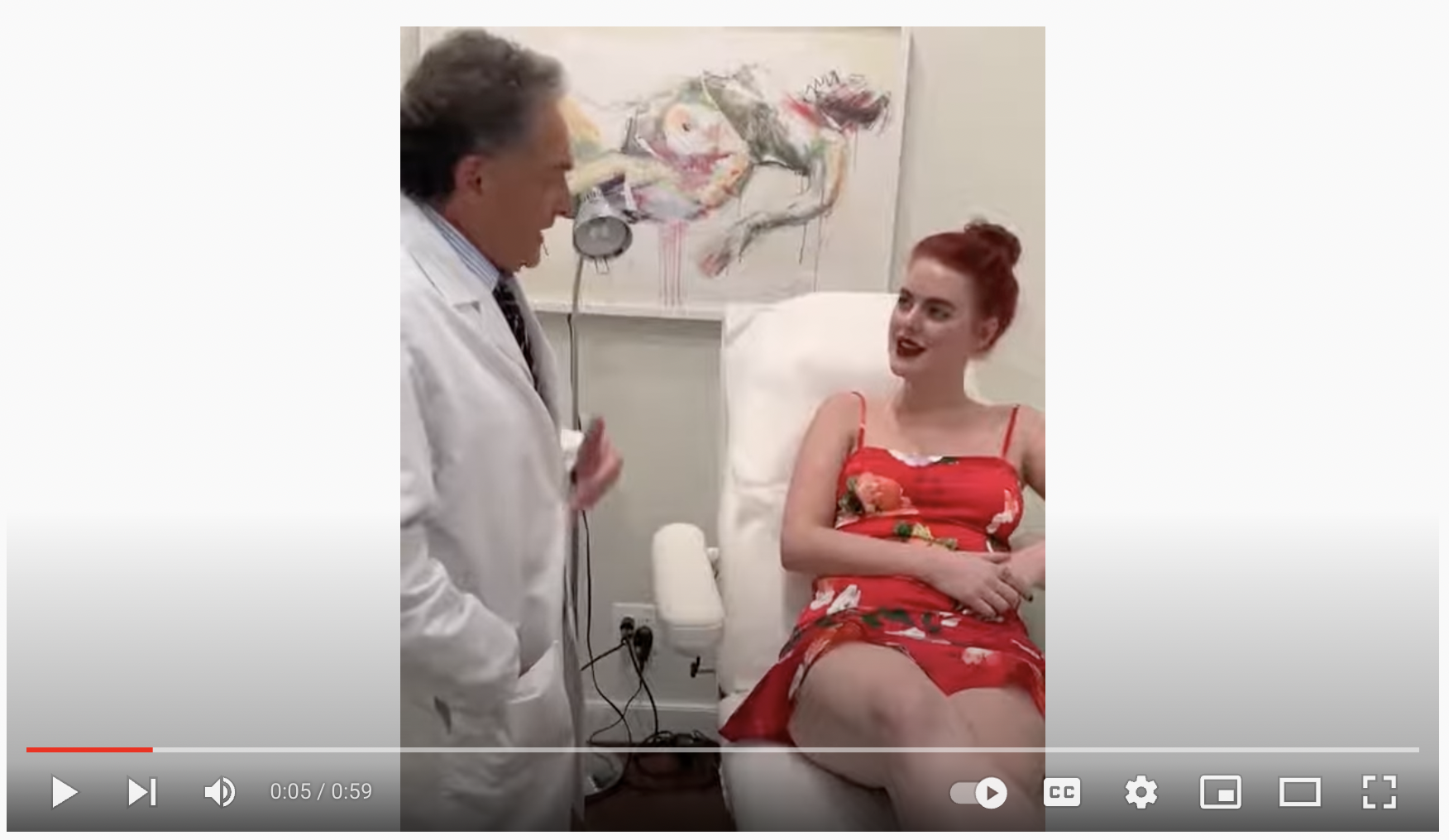 Schedule Your FREE Consultation for Rhinoplasty in New York City

If you’re thinking about nose surgery we strongly advise you to visit our clinic 0r call our office and ask for an appointment with Dr. George Lefkovits, a facial plastic surgeon from Park Plaza plastic center in New York.